heritage noun
her·​i·​tage | \ ˈher-ə-tij  , ˈhe-rə- \
Definition of heritage
1: property that descends to an heir
2a: something transmitted by or acquired from a predecessor : LEGACY, INHERITANCE proud of her Italian heritage
a rich heritage of folklore
The battlefields are part of our heritage and should be preserved.
b: TRADITION
the party’s heritage of secularism

There have been a lot of conversations about heritage as of late. Right now, what one person looks to as a proud heritage, another person looks to as oppression. This is resulting in the removal of statues and the review of what is often a tumultuous history of our nation.

We all learned that rhyme as children when we were taught Columbus “discovered” America.

The truth is, as children what we were taught was not always accurate. According to Columbus’ journal, he suggested the enslavement of the indigenous people he encountered in modern-day Haiti. While he did not find the riches he expected, he sent back 500 indigenous peoples in the form of slaves to Queen Isabella of Spain. The horrified Queen immediately returned the individuals, as she considered them Spanish subjects, thus they could not be enslaved.

Columbus made a total of four trips to the “New World” during his days of exploration. The man is now a point of controversy due to the true history of his exploration. Some consider him a great explorer, as the first in a long line of explorers to travel to the Americas. Others remind us of the flawed history we were taught and his inhumane treatment of the indigenous people he encountered.

So, why am I telling you all this? Stay with me.

New Jersey has been the home of countless Italian immigrants and Americans of Italian descent; like me.

I was born in Columbus Hospital in Newark. I grew up with macaroni on Sundays at 3:00 p.m. – sharp. When I passed my driver’s exam, one of my new jobs was heading to DiPaolo’s Bakery on Bloomfield Avenue before dinner on Sunday to pick up bread and dessert. I went to (and still go to) the annual Feast of St. Gerard at St. Lucy’s Church; the Church my Great Grandmother would help clean every day after morning mass. We were taught to be proud Americans – but to never forget where you came from.

During October, Italian Heritage Month, Columbus Day is celebrated; often with parades and sometimes, a day off from work. Due to the recent civil unrest, there are calls to remove statues of Columbus and eliminate the holiday. Some have even suggesting replacing the day with “Indigenous Peoples Day.”

In the city of my birth, there are – or were – two Columbus statues. The larger of the two was in Washington Park. It stood as a gift from the Italian community of Newark in 1927. Funds were privately raised directly from the immigrants who helped turn Newark into a modern metropolis. The second one I saw often, as it was in front of St. Francis Xavier Church on Bloomfield Avenue. My Grandmother was part of the St. Francis Senior Citizens Club. Another “job” of mine once I was able to drive was to drop her off and pick her up from her meetings. This statue was a gift to Newark from the Italian Tribune newspaper.

Both are now gone.

Under the cover of darkness, Mayor Ras Baraka had the statue removed from Washington Park. In a press release from the Mayor, he said the removal of the statue is not a slight to the Italian-American community, but as a “statement against the barbarism, enslavement, and oppression that this explorer represents.”

Trust me when I tell you, a slight is exactly what that act was.

That statue the Mayor took down represents more than just a man. It represents the hundreds of thousands of Italian immigrants and Americans of Italian descent that made important contributions to the history of Newark, New Jersey, and the United States. There is no doubt the history of Columbus we were taught as children is not accurate. He does not represent all that is great of the Italian heritage. However, if the statues of Columbus come down, will something to commemorate all Italian immigrants and their descendants have done go in its place? While I hope so, I doubt it. 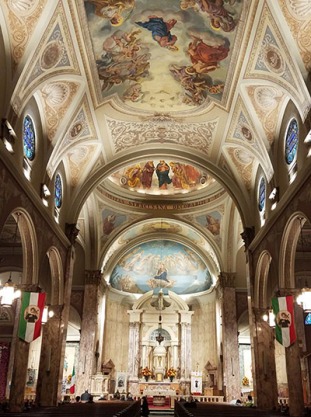 Italian immigrants throughout the country assimilated quickly to their new homeland. Oftentimes, they gave up their language and in many instances, their ethnic names within one generation. Pasquale became Patrick and Lucia became Lucille – all in the effort to be more “American.” When I was a child, I used to bring home books in Italian from the library and beg my Grandmother to teach me. Her answer was always the same; “you are American and you speak English!” To this day I am still trying to learn.

Despite the often posted “Italians need not apply,” they worked hard. They were masons, butchers, and worked on the railroad. The men built the Cathedral Basilica of the Sacred Heart. They enlisted in the military of their new homeland, and fought on the front lines of two World Wars.

I hope a new statue will be placed in Newark as a way to commemorate all the contributions of the Italian community. Here are four examples:

Mother Cabrini: Saint Francis Cabrini was an Italian immigrant who created a missionary to help other Italian immigrants when they came to America. She is the first American Saint to be canonized by the Roman Catholic Church.

Amerigo Vespucci: Our country’s literal namesake, Vespucci traveled to the “New World” multiple times during his time of exploration.

Monsignor Joseph Perotti: As a young priest, Father Perotti immigrated to Newark in 1896 and became the first Pastor of St. Lucy’s Church, an important Italian place of worship, where he remained his entire pastoral career, until his death in 1933.

These are just four of the countless members of the Italian community in Newark that are deserving of recognition.

I am a proud American. I am also proud of my heritage.

Right now there’s a lot of yelling on both sides of the argument to remove the statues of Christopher Columbus. A lot of yelling, but not a lot of listening. I really wish both sides could come to an understanding that would make everyone happy, however, I doubt that will happen. I truly fear if the statues come down, Columbus day is removed from the calendar, all the good Italian immigrants and the generations after them will be lost to the ages.

We will truly forget where we came from.