As one of the original 13 colonies, New Jersey has a long and rich history. In 1620, a trading post was established at the site of Bergen, New Jersey, which would later be developed as the first permanent white settlement in the area. 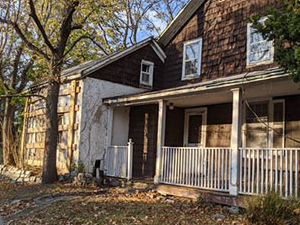 The Van Dien-Ruffgarten House in Paramus. The Paramus Planning Board is discussing a demolition permit for the site on Nov. 7. (Photo: Stephanie Noda/NorthJersey.com)

As time marches on, however, many of our oldest buildings are in danger of being wiped off the face of the map. In 2017, historians and concerned residents in Bellmawr, New Jersey, woke up to find the Revolutionary War-era home they had been trying to save had been destroyed at dawn by a construction crew, just one day after an attorney representing a group working to save the home filed a lawsuit to prevent the house’s demolition. Why? To expand a highway. The home that stood on that site since 1744 was razed before the process played out in court.

Each year Preservation New Jersey releases a statement of the 10 most endangered historical sites in the state. In 2016, one of the site listed was the Van Dien-Ruffgarten House in Paramus. This property is now one step closer to demolition. The Paramus Planning Board recognized a request by 113-117 West Midland Avenue LLC for a demolition permit for the site, 117 W. Midland Ave., at its meeting earlier this week.

The Van Dien-Ruffgarten House sits on a valuable nine-acre lot and is one of six remaining examples of a Jersey Dutch stone house in the borough. Built between the 1840s and 1850s, the one-room stone portion of the home was said to be occupied by members of a small enclave of educated and independent African-Americans.

Over the past several years, the Bergen County Historical Society Historic Preservation Committee has tried to negotiate in good faith with the town in an effort to save the centuries-old building.

We are now on the precipice of seeing another historical site demolished in our beloved state. If we aren’t careful there won’t be anything of our history left.

So what can we do?

This is My New Jersey

This is My New Jersey

Read the RSS of my Blog