Each spring for the past 19 years, something amazing happens in the concrete jungle of Jersey City. A pair of peregrine falcons takes up residence at the top of a skyscraper; 101 Hudson Street to be exact.

The peregrine falcon historically bred in New Jersey on the cliffs in the Palisades and along the Delaware River. During the 1930s and 1940s, there were approximately 350 pairs of peregrines nesting east of the Mississippi. As the century progressed, the number of nesting pairs rapidly decreased due to multiple factors, including unregulated hunting pressure and the use of DDT. Now, the peregrine falcon is on the state’s endangered list. 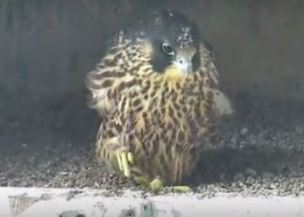 Thanks to hard work and conservation efforts, there are now over 20 nesting pairs of falcons  in New Jersey. Two of which you can actually watch thanks to “falcon cams” – one in Jersey City and one in Union City Each year for at least the last 15 years I’ve looked forward to the spring when the Jersey City falcon cam is turned on so we can all watch for egg laying, hatching, and watching those eyases (baby falcons) fledge (take flight) for the first time.

Well, this year something happened that was just shocking to say the least. A few days ago window washers at 101 Hudson sprayed the baby falcons with water, pushing two of the three eyases off the roof of the building. As these two babies had not yet fledged, they both fell. One was rushed to The Raptor Trust for evaluation and treatment. The second went missing for several days. Volunteers scoured the area for days for the second eyase. It was finally found Friday and is also now at The Raptor Trust. The third eyases was found at a lower level and was returned to the nest box on the roof.

Viewers of the falcon cam could only watch in horror as all this took place.
According to reports, building management was finally reached and the window washers were escorted off the premises. New Jersey Fish and Wildlife is investigating the entire event.

This entire sad event has shocked the entire bird watching community, as the Jersey City Falcon Cam has a world-wide following. I remember back when I first discovered “the cam” and sharing it with a friend, colleague, and fellow bird lover. As word spread about the falcon cam, other colleagues would check in on the falcon family throughout the day. As member of the IT team, and when Internet access was at a premium, I was supposed to make sure access was for work purposes only. However, when it was “falcon cam time,” I never seemed to be able to catch anyone using the Internet improperly. Maybe because I wasn’t looking very hard.

I hope the two window washers are, at the very minimum, disciplined and the rest of the employees in the building are educated about the endangered birds that live on the roof. These are special birds that need to be protected. The more people that know they are there, the better so we can all help protect them.

If you have never checked out any of the falcon cams, I hope you do!